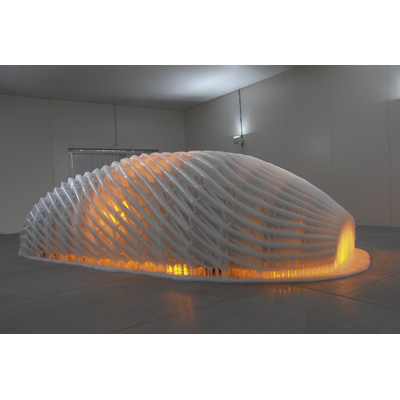 "By bringing together art, design, social and environmental issues, I hope to contribute to a different way of thinking-feeling-experiencing cars and seeing them in relation to the time and space in which we live."

Olafur Eliasson has removed the outer covering of the H2R prototype and replaced it with a complex skin of two reflecting layers of superimposed metal spanning the body of the car. This shape is covered with fragile layers of ice. Thus Eliasson transforms an object of advanced automobile technology and industrial design into a work of art reflecting themes of mobility, temporality, renewable energies and the relationship between car production and global warming in a sophisticated and poetic way.

In Eliasson‟s sculptures and atmospherically unmistakable installations one senses not only the conditions under which they come about and the impact of their energy but also the beauty of natural phenomena. It is it not until they enter the perceptions of the viewer that they complement each other. Olafur Eliasson‟s predominantly sculptural, installative and photographic work is consistently devoted to the complex of topics pertaining to civilization/technology and nature.

The BMW H2R research vehicle has established nine records for hydrogen-powered vehicles featuring a combustion engine. On the high-speed track at Miramas (France) the company proved that hydrogen can replace conventional fuels, without the driver having to forego the driving dynamics offered by modern cars.